See if you can pass this furniture history exam?

False.  There is nothing else to say about this.  If you thought that the answer to this question was true, hire a designer to redo your home.

The Truth & Nothing but the Truth!  There may be links or ads on our site that pay us a commisson if you "click" and purchase something... Thanks! (it helps us keep the lights on! ) Now you may keep on reading!

False.  Thomas Chippendale was born in Otley , England in 1718.  He died in 1779.  According to Wikipedia, he came from a long line of woodworkers.  He specialized in English Roccoco and Neoclassical designs, which reflected the tastes of the mid-Georgian period in England.  In 1759, he published his book, The Gentleman and Cabinet Maker’s Director.

False.  According to “Furniture Facts The 21st Century Edition”, the Queen Anne period had its beginnings in the opening years of the 18th Century.  The style evolved from William and Mary furniture with heavy influence from Dutch styles of the time.  Some of the innovations from this style include the highboy, Windsor chairs and overstuffing upholstery.  Common traits of Queen Anne furniture include simple lines and carvings, the cabriolet leg and the use of walnut.  Queen Anne chairs were built to conform to the human body as opposed to the stiffness of earlier designs.

True.  Except for the details.  The one legged milking stool was invented for the reasons stated. 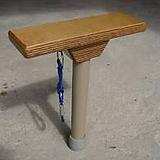 If you got any of the answers correct, you pass the course with an A.  If you guessed incorrectly on question one, I’m available for private tutoring. :)